New and Pre-owned aircraft brought to you by an industry leader.

Avanti EVO is the latest chapter in the story of the aircraft which rewrote the rulebook on aviation elegance and practicality.

Avanti EVO blends the very best of Italian style, peerless craftsmanship, and intelligent thinking to create an aircraft that stands alone for its values. With greater range, faster climb, reduced fuel costs, a lower noise footprint, added safety systems, and a more luxurious cabin, Avanti EVO is yet another step forward. Its speed exceeds 400 KTAS, faster than many jets and at a fraction of the direct running costs. Add to that a significantly improved service and support network, an innovative new maintenance program that can keep costs under control better than ever, and Avanti EVO stands alone for intelligence and elegance.

The Avanti EVO is a business aircraft like no other. Having learnt everything there is to know about aviation in its 100-year history, Piaggio Aerospace rewrote the rulebook to combine renowned Italian design with superb craftsmanship in an aircraft that simply works best for business. The Avanti EVO is refreshingly different– not just in terms of its head-turning looks, but also in terms of superior performance and comfort. The EVO is very much a business aircraft for the future, built on the best traditions of the past and today’s state-of-the-art technology. The EVO is one of the most environmentally friendly aircraft on the market, with reduced emissions and aircraft noise making it a logical choice. The fastest twin turboprop ever made – faster than some jets – the Avanti EVO achieves greater speed without compromising operating costs, running at up to 30% less than a jet of the same size.

The spacious cabin is truly an office in the sky, allowing passengers to maximise their working day while also arriving fresh, prepared and ready to do business. Unveiled in 2014, customer deliveries of the Avanti EVO began in 2015, with production now ramped up at a new facility in Italy. The benefits of ownership are considerable. As well as flying one of the smartest, most efficient, aircraft in the skies, Piaggio Aerospace’s expansive
customer support and service network minimises downtime while also keeping costs under control through an innovative fixed-fee programme.

THIS IS THE AVANTI EVO ADVANTAGE. 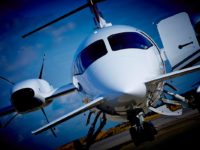